Upon arrival at the Second Chance Life Skills Center, La Bastille attendees were greeted by a Hollywood-style red carpet, featuring stilt-walkers, fire-eaters, and jugglers, while enjoying the sounds of acclaimed singer-songwriter Harry Bacharach. Hundreds of people gathered under the tents and enjoyed a smorgasbord of delicious cuisine, which was prepared and served by the students of EDWINS.

Support for EDWINS and this event ran deep with a variety of attendees, including locals who appreciate and support EDWINS’ mission, as well as Cleveland-area business leaders, including the former CEO of Key Bank.

EDWINS Founder and CEO Brandon Chrostowski discussed the partnership with GTL during his speech, announcing to guests that EDWINS curriculum and video series will be accessible on 500,000 GTL tablets nationwide by the end of the summer. In his remarks, Mr. Chrostowski stated that EDWINS is the “national model for re-entry” and signaled out the Greater Cleveland community for helping make it happen.

“Speaking for both myself and Alberto, being lifelong Clevelanders and being proud employees of GTL, we could not be happier, more excited, and more grateful to be part of this blossoming relationship with EDWINS,” said Ms. Paulini.

GTL is proud to be a partner of EDWINS and help equip incarcerated individuals with new essential skills and training, which offers a path to higher learning, reduces recidivism, and improves chances for successful reentry. 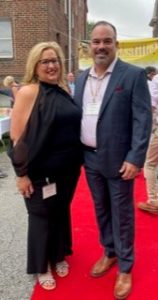